Are Some Evangelical Pastors Using a False Roman Model of the Kingdom? 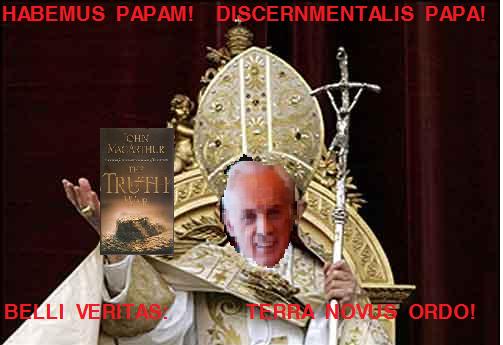 Thats the title of an interesting piece I found in Charisma News, that should be read by all.

Here it’s a piece for you to have a taste of it:

For example, the Roman Catholic Church, in theory, largely believes that their (Catholic) church is the physical manifestation of the kingdom of God on earth. This is why the pope is referred to as the vicar of Christ or as the prince of the kingdom on earth, representing God Himself as the leader of His church on earth. Hence, the Vatican is viewed as a nation with innumerable riches and her hierarchy has accumulated enormous wealth (its own Vatican Bank), political influence (the Vatican has its own ambassadors to various nations), as well as its own institutions of education, art, music and canon law (church doctrine, councils and legal procedures regarding various situations of applying church law both in church and in secular culture).

Hence, in summary, the Roman Church has its own empire with an enormous subculture in which it (as a religious nation) relates to secular nations and institutions. Thus, the Roman Catholic application of the kingdom of God is extremely church-centric, which leads its adherents (in each parish or diocese) to depend upon their local church to exert religious influence in society instead of obligating non-clergy members in the marketplace to influence culture.

Consequently, this has become the subconscious model for many evangelical pastors in Roman Catholic paradigm cultures, resulting in many senior pastors of megachurches acting like popes to their large congregations and building their own mini-empires! Their (Roman) interpretation of the kingdom has resulted in further empowering a (pope-like) top-down leadership style without processing decisions through a multiplicity of ministers, as well as the use of the kingdom message of cultural dominion to get businesspeople and congregations to donate vast sums of monies to build huge church-centric empires that include banks, shopping malls, businesses, hospitals, schools and many other vestiges of societal institutions.

That is to say, the people in the congregation exist to empower their local church leadership to exert (institutional) cultural influence instead of the biblical model of local church leadership existing to equip the saints for the work of the ministry to exert cultural influence. (Read Ephesians 4:10-12. Verse 10 shows the work of the ministry involves filling up the whole earth for the glory of God. Thus, equipping the saints allows for marketplace activities to be called ministry, not just traditional ecclesial ministry.)

Many who claim to uphold the “cardinal” doctrine of Justification by faith “alone”, are happy being like Rome in other areas.

Have a read of the entire article, and hopefully, it will make you think.

Who do you say Jesus is? Sermon preached at Seed Church Swan Hill

The Spirit and the Church